This video shows us passing the lowest bridge all week… about 17 feet, leaving Joliet IL.

Our small stainless steel whip antenna, mounted to the left of the the radar actually rubbed the bridge (no damage). The white cube atop the radar is the camera that this video was taken from.

(This bridge can open if need be.)

The lowest fixed span bridge (that cannot open) on the entire Great Loop is in Lemont IL at mile 300.6 on the Chicago Sanitary and Ship Canal. It’s vertical clearance is 19.6 feet above the normal water level.

Ray & Diane aboard Radian Journey easily clear the 19.6′ of this infamous bridge, (shown above).

Below, Mark & Karen on Kay Dee clear it as well as a train passes overhead.

There are two rivers from Lake Michigan one can take to access the Inland River-ways. One is right through the middle of downtown Chicago, which we took as shown below.

This route requires the ability to clear the DuSable Bridge at Michigan Avenue 18.7 feet, which we cleared (as shown in the video below) by taking down some antennas and other things. 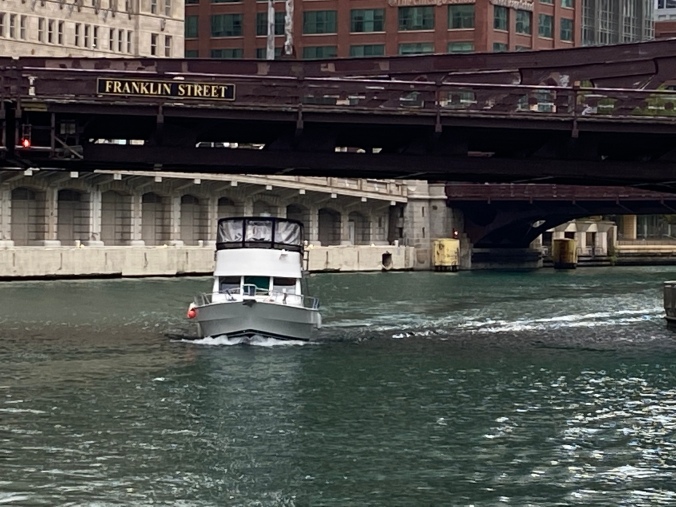 Boats which cannot clear that 18.7′ DuSable Bridge need to take the alternative, the Calumet-Sag Canal south of downtown Chicago. But that does not get them a pass to avoid the 19.6 foot RR bridge at mile 300.6 further downstream! Every Looper has to go under that one.

On this topic of low bridges, see our June 9 post about the Western Erie Canal: Shellerina.com/2021/06/09/low-bridges/